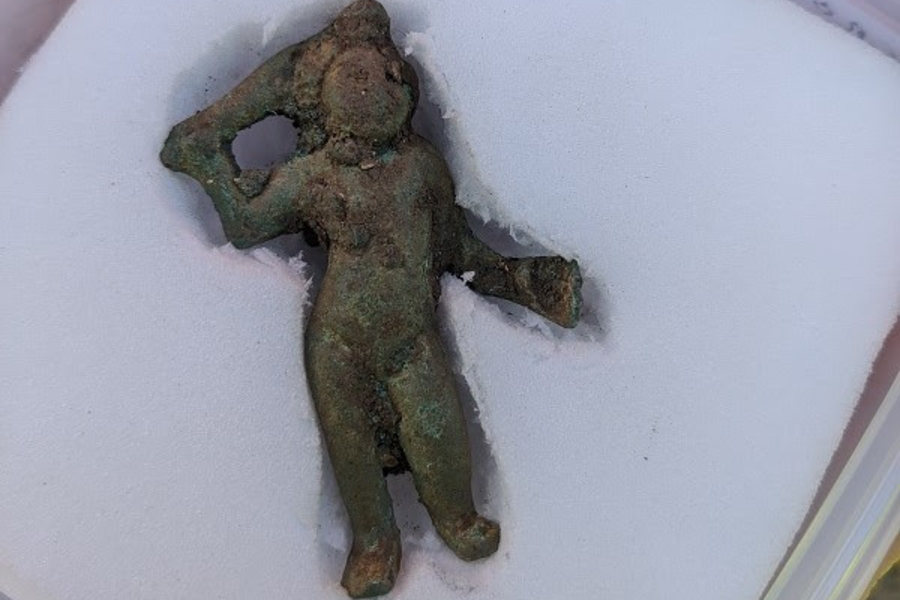 Made of solid bronze with wings and holding a flaming, the figurine was discovered in a deposit of charcoal and may have been an offering to the gods

As Valentine’s Day comes around, it’s natural to feel a little lovestruck – and this Cupid figurine certainly caught the eye of archaeologists working for Highways England.

The almost 2,000-year-old figurine depicting Cupid, the Roman God of love was discovered along with a bow-shaped brooch, and a Roman or early Saxon skeleton.

The items were found along the proposed 3.4-mile stretch of the new A417 Missing Link route and go some way to showing what life in the area was like thousands of years ago.

The Cupid figurine is a rare find, with less than 50 known in the UK, and is one of only three that have been found as part of an archaeological dig as opposed to by metal detectorists.

Made of solid bronze with wings and holding a flaming torch, the figurine was discovered in a deposit of charcoal, suggesting it could be an offering to the Gods.

All the finds are part of early survey works on the £435 million A417 Missing Link route, which aims to better connect the Midlands and North with the south of England.

Survey work saw 335 trenches dug in fields around the route over a period of four months to help the project team learn more about what life was like on the site during Roman times, nearly 2,000 years ago.

Michael Goddard, Highways England Senior Project Manager for the A417, said: “The archaeology works we are undertaking along the A417 give us a significant insight into life on the site thousands of years ago, providing a unique glimpse into the past.

“It’s fascinating to see that Romans would have lived in the area in a similar way to how we do today – drawn to the area’s stunning beauty, something we are aiming to maintain with this landscape led scheme.

“It’s also fascinating to see that the Romans also left offerings to the God of love to keep them happy and help shape their own lives – with Cupid now a staple of Valentine’s Day celebrations all over the world.

“These finds help us understand the relationship between the improvement scheme and the surrounding historic environment which will ensure the protection of any historic finds for generations to come.”

Jim Keyte, Archaeology Lead for the project, added: “The area of the project is rich in history, and the existing A417 largely follows the former Roman Road between Cirencester and Gloucester; Birdlip itself has its origins as a Roman settlement.

“It has been fascinating to reveal more about the area and the people who once lived here. Our investigations will continue as the project progresses, and we expect more interesting discoveries to come.”

The A417 Missing Link improvement scheme is located within a rich archaeological landscape, with evidence dating back up to 2,000 years ago right through to the modern day.

Commencing with a study of the early historical records, and then a series of geophysical surveys – an archaeological technique to look for features buried beneath the ground – the team then undertook evaluations to unearth any finds. 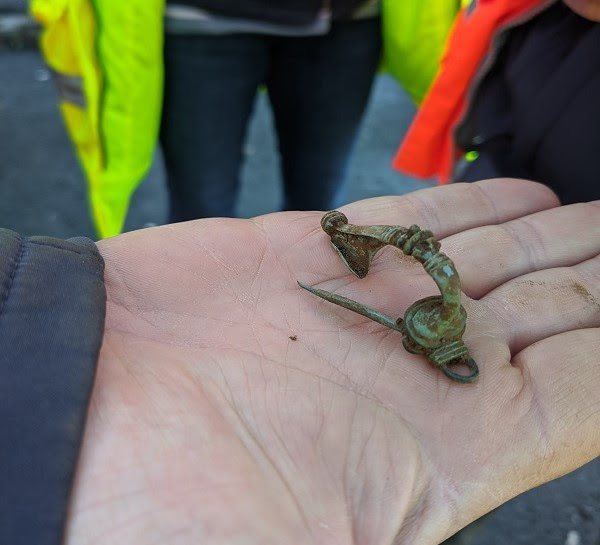 While the most significant find was the figurine of Cupid, the brooch discovered at the same settlement also gives an insight into daily life as a Roman, who would have used the brooch to fasten their cloak to keep out the wind that still blows strongly across the landscape. The brooch is ornate, and shaped like an archer’s bow- it’s likely that the owner would have been quite wealthy. 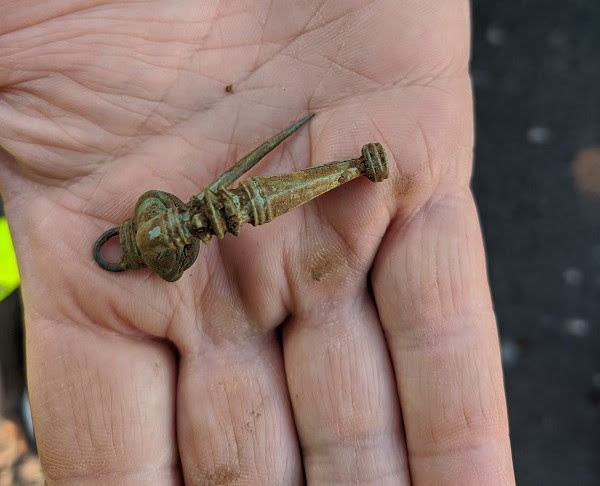 The skeleton has proved a little more unique though. Oriented north to south, archaeologists consider that it is unlikely to be Christian, meaning the remains date to either before 4th Century Roman or early Saxon (5th-7th Century).

Researchers were also baffled by the fact the remains were buried face down; potentially suggesting the mystery person was not well liked, for instance a criminal.

However, the team will never really know as the skeleton will be left in situ and not studied further.

Mel Barge, Inspector of Ancient Monuments at Historic England, said: “We have been advising Highways England on this proposed road scheme alongside the County Council Heritage Team.

“The cupid statue is a rare and exciting find. It will tell us about the lives and beliefs of the small Roman community that lived alongside this road 2,000 years ago.”

And discoveries like these are being unearthed at Highways England schemes across the country.

Similarly, as part of an improvement of the A1 in North Yorkshire, archaeologists discovered the Romans settled in the area at least a decade earlier than previously thought, producing coins and interacting with local people.

They also found evidence of early investment in infrastructure and 2,000-year-old attempts to fix potholes.

Survey work has uncovered some interesting but not unexpected finds, including quantities of worked flint and pieces of pottery and a vessel containing a cremation burial dating back as far as 4,000 – 5,000 years.

Outside the construction footprint of the scheme – which includes a two-mile tunnel, a further 50 metres away from the Stonehenge monument – a small hengiform monument and bones from a crouched burial, and a further cremation burial have been found. 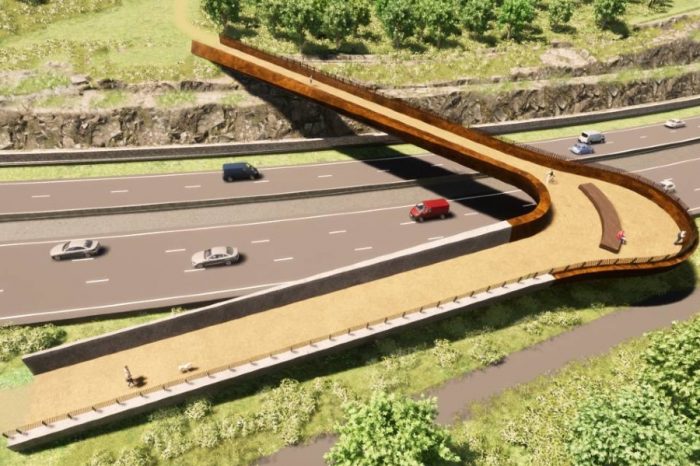 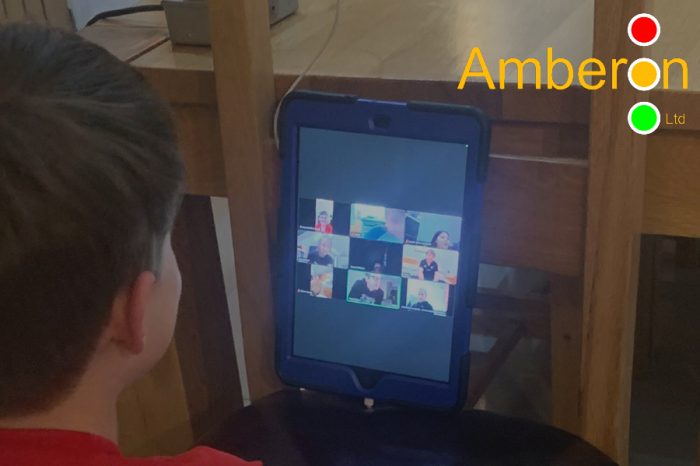 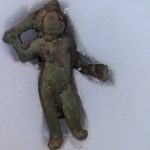