The Department for Transport (DfT) has announced funding allocations for the second round of their active travel fund – with £799,900 on its way to Lincolnshire.

The funding is to be used to give people more opportunities to choose walking and cycling for their day-to-day journeys, to boost active travel and reduce traffic congestion.

The new money could fund measures including:

“Through these two funding allocations, we’re looking at an extra £900,000 to help further our plans to make walking and cycling easier in Lincolnshire.

“But the crucial thing is this cash won’t just benefit walkers and cyclists. For every journey we can make active travel a viable option for, we’ll take a car off the road, reducing congestion and pollution for all of us.”

Research cited by the DfT found that nearly 8 out of ten (78 per cent) people in England supported measures to reduce traffic in their neighbourhoods. And it found that 65 per cent support reallocating road space for walking and cycling in their local area.

For this second tranche of the fund, the DfT have given councils more time to spend the money and implement schemes.

“Without the restrictive timescales to spend the cash this time around, we’re able to draw up plans with the communities they are for. We can consult on and amend plans with local people to ensure they have the most benefit to their communities, and get the biggest buy-in for the scheme.

“This is especially important when it comes to the idea of school streets and low traffic neighbourhoods, where we might be restricting through-traffic for all or part of the day. We’ve got the opportunity here to work with a school or a community that needs and wants these measures to help keep children safe or stop dangerous rat-running.

“We’d still welcome residents letting us know where they’d like to see new cycle lanes, widened paths, or road closures – they can submit their ideas to us through WidenMyPath.”

You can submit your ideas for pavement widening, new cycleways or road closures online at www.widenmypath.com. The site allows you to pinpoint on a map where you’d like to see changes.

The second round of funding comes as data from fitness app Strava has revealed over 16,000 more cyclists took to Lincolnshire’s roads in 2020, compared with 2019. The data also showed that more people are choosing to commute on their bikes in Lincolnshire, with around 2,000 more regular commutes logged through the app each month compared to last year.

In the first round of the active travel fund, Lincolnshire County Council received £105,500 and invested in new cycle parking across the county, pop-up cycle lanes in Lincoln, and the part-pedestrianisation of Horncastle Market Place.

“For the first round of funding we were very clear that all the schemes were temporary. They had to be because of the short timescales to put them in; if they work they’ll stay and if they don’t we can try something else. For the second round – worth almost eight times as much – we’ll be drawing up firm plans with different local stakeholders, and making meaningful, sustainable changes from the off”, Cllr Davies added.

Lincolnshire County Council will be publishing information about the schemes that form part of this second round of funding soon, including details how communities can get involved in shaping those plans. 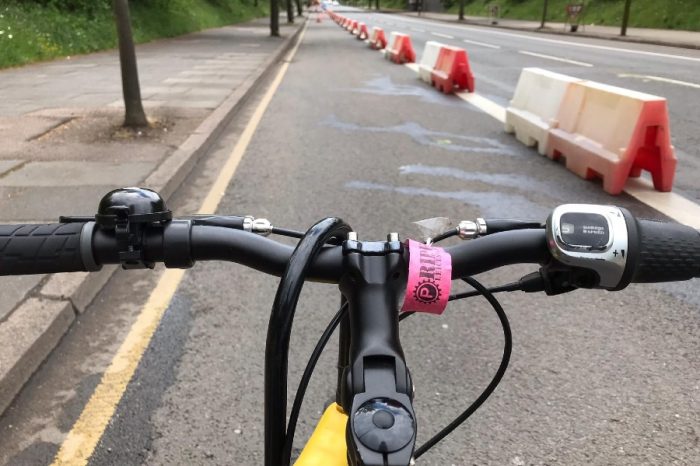