Walking and cycling through the centre of Stafford has just got easier due to the completion of a new highways scheme.

The improvements to Route 5 of the National Cycle Network, often referred to as the ‘missing link’ means that cyclists are now able to travel through Stafford directly rather than having to negotiate a former one-way street.

The works at South Walls included widening pavements to create a safe cycle and walking space as well as new crossings. The work has also significantly improved the public realm for commuters and shoppers alike and has helped regenerate that part of the town. Changing the way people access the area is also expected to help to change travel behaviour and encourage more cycling and walking.

The work was finished in May, with representatives from Staffordshire County Council and walking and cycling charity Sustrans, meeting up to take a look at the improvements. The two organisations worked in partnership to deliver the scheme, which was made possible thanks to a grant from the Department for Transport.

Speaking at the South Walls scheme, Cllr David Williams, cabinet member for highways and transport at Staffordshire County Council, said: “I’m very impressed with the final quality of this scheme, which is all about making it easier and safer for people to walk and cycle, while improving the look and feel of the town. The area looks great, with an excellent facility for local cyclists to enjoy and I’m sure we will see many more people using the path.

“We know that cycling and walking help people to lead healthier and happier lives. However active travel also helps to reduce congestion on our busy roads which is a key priority for us. Attracting more visitors to the county town and boosting business is also something we want to see and I’m sure the new cycleway will help encourage more visitors and achieve this.”

Also commenting at the scheme, Ridhi Kalaria, Sustrans Partnership Manager, Midlands and East said: “As custodians of the National Cycle Network, we undertook our ‘Paths for Everyone’ review in 2019. We were open and transparent about the improvements that the network needed. Thanks to a £20m grant from the UK Government, we’ve been able to work with our partners to improve the network, with a range of schemes like the South Walls project in Stafford.

“This transformational project has created an area of quality public realm, which fundamentally changes the way people access the area. This makes it easier for people in Stafford to make smarter and healthier travel choices. The National Cycle Network belongs to everyone and now more than ever, it can help all of us to lead happier, healthier lives.”

The two lane South Walls Road has been reduced to one lane, with minor lane marking amendments at the roundabout on Lammascote Road to improve traffic flow. A taxi rank on Clarke Street has also been moved to South Walls and has been replaced with pay and display parking.

National Cycle Network Route 5 runs from Stafford to Stoke, passing through Stone on quiet country lanes and canal towpath, which was recently improved in Stone. Stafford also has good access to the wider National Cycle Network routes, with the Gnosall Greenway (NCN 55) providing a route out to wider countryside.

Original source article: https://www.inyourarea.co.uk/news/new-highway-scheme-gives-boost-to-walking-and-cycling-in-stafford/
Disclaimer: This article was not originally written by a member of the HighwaysIndustry.Com team. 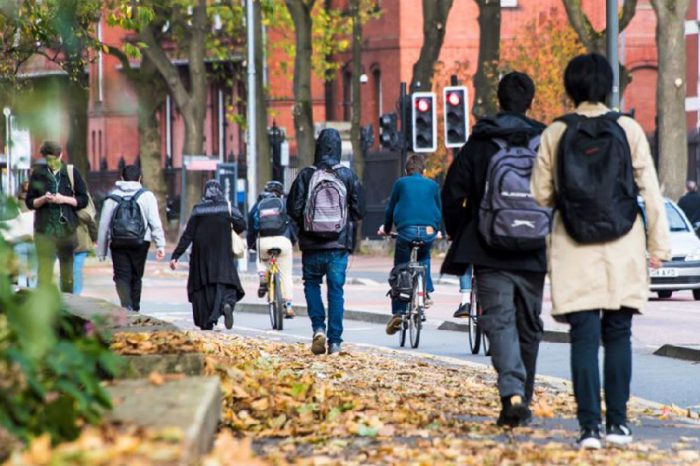