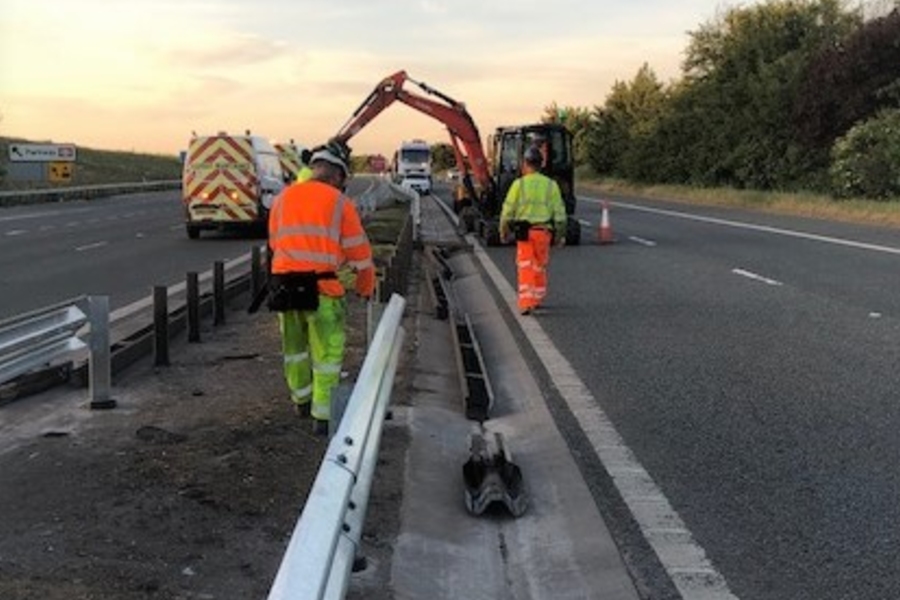 Challenged by the coronavirus pandemic and social distancing restrictions, teams working on Highways England schemes have come up with new and innovative ways to keep workers safe as they keep the country moving.

Highways England has followed Government guidance and continued to carry out essential maintenance and press ahead with major schemes to get supplies and workers where they need to be during the lockdown.

But to ensure workers are also protected and can stick to strict Covid19 restrictions, teams have developed some creative ways to maintain social distancing – ranging from waistband alarms that alert workers to anyone within 2m to virtual safety inspections.

“During the coronavirus crisis maintaining a safe road network while ensuring our workers are protected has been the priority.

“Project teams across the country, from both Highways England and our supply chains, have taken up that challenge and developed creative and innovative ways to get essential roadworks done without compromising the safety of workers.

“We are proud of the way that during these difficult times our teams have carried on working to keep the country moving and through various safeguarding measures have been able to help prevent the spread of Covid19.”

In the South West workers have been wearing devices tied around their waists which sets off a buzzer in their safety helmets if someone gets too close.

The technology was already being used by Highways England contractor, Barrier Service Ltd, to alert workers on site when heavy equipment and machinery was moving nearby. The transponders have now been adapted to alert workers to anyone close to two metres away.

“With the help of our contractors we are finding innovative solutions to keeping workers safe on site by adapting existing technology designed to alert workers when heavy equipment is close by.

“By reprogramming radio transponders worn on a waistband we have been able to provide a protective bubble around all our workers. When someone gets close to two metres away a buzzer is set off in the workers hard hat to alert them and social distancing can be maintained.”

The system is being used on barrier replacement schemes on the M4, M5 and M32.

It is hoped that the waistband devices will shortly be replaced with a smaller, armband alert.

While in the West Midlands, managers have been able to carry out safety checks on work sites and depots through a virtual tour which has avoided the need for additional people to travel there.

Wearing a mounted portable camera and headset, a supervisor already working on site has been directed around the facilities by the managers through Microsoft Teams. This enables them to view different areas and facilities as well as ask questions of workers on site.

As well as the usual safety checks they have also been able to check the Covid-19 measures such as wash stations and vehicle sanitization are all in place.

Elsewhere, hi-vis jackets have been issued to those working on the A45/A6 Chowns Mill roundabout improvements project which carry messages to remind workers to keep their distance.

Workers on the Northamptonshire scheme wear jackets carrying the warnings: 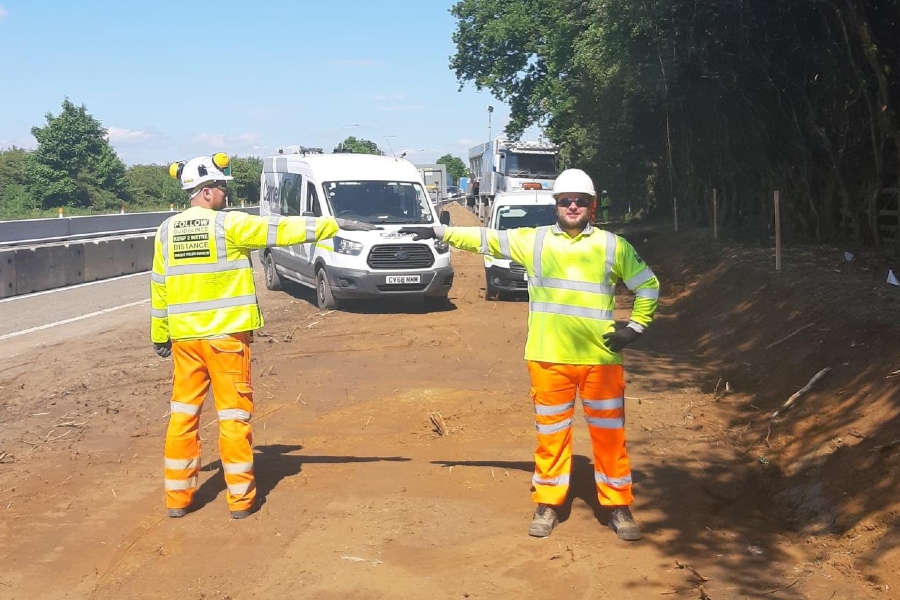 Keeping their distance, one of the new hi-vis vests workers are wearing on the Chowns Mill scheme

In Manchester, an important operation to lift a bridge – weighing around 800 tonnes – looked like it might not take place when a key member of the team could not be present because of Covid19 restrictions.

Highways England is repairing the 200m-long bridge which carries the M60 over the River Mersey and Palatine Road near Didsbury and needed to lift it by 5mm so the work could take place.

Balfour Beatty’s permanent works designer, Phil Davis, was unable to attend because of the lockdown but was vital to the work. Using Microsoft Teams, Phil could monitor the situation from his home and help complete the job without compromising anyone’s health or safety. 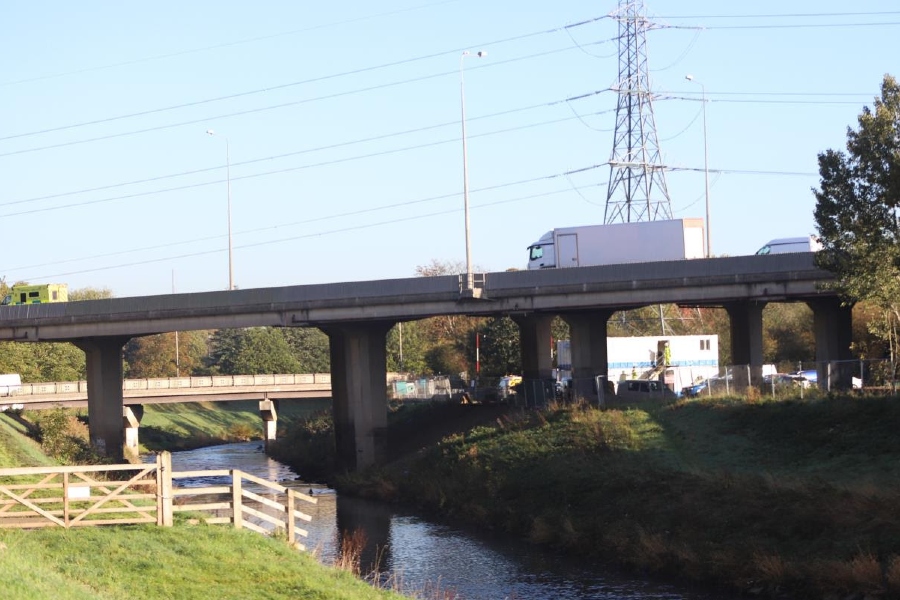 Balvac, Balfour Beatty’s repair, strengthening, refurbishment and protection specialist, is the principal contractor on the scheme to repair the 15 concrete columns that the M60 bridge currently rests on.

The bridge was originally constructed using reinforced concrete in the early part of the 1970s and some of the steel inside the concrete has now begun to rust.

Low traffic numbers – which have fallen by as much as 85 per cent during the lockdown – have also enabled schemes across the country to safely carry out work during the daytime.

This gives the teams a longer working window than they have overnight so can finish the roadworks more quickly and means residents are not disturbed by noise during the evening.

The A500 Etruria Widening Scheme in North Staffordshire, adding an extra lane in each direction to the busy dual carriageway, is one of the those which has been able to switch to daytime working to get ahead of schedule.

While in the South West a number of projects have been brought forward and completed in April and May including six resurfacing schemes on the A30, A38 and M5 and the replacement of six-and-a-half miles of central reservation barrier along the M32, M5 and M4. 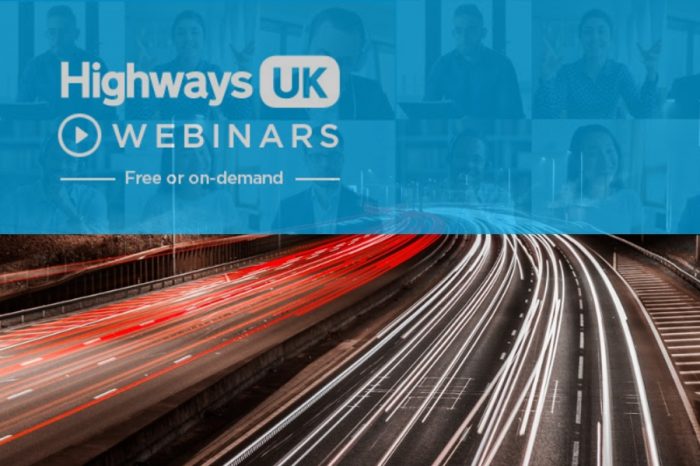 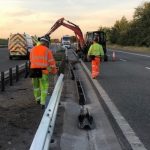