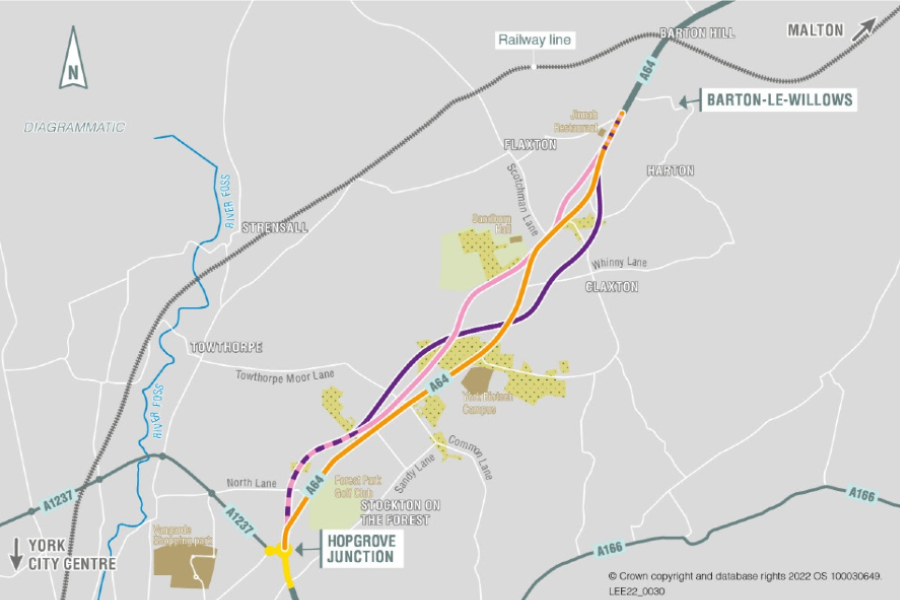 The public is being given the opportunity to shape the future of a section of the A64 from today (Monday 25 July).

Several options to improve the Hopgrove junction near York to Barton-le-Willows, all of which will bring significant benefits to the area, have been put forward for public consultation. National Highways is inviting road users, residents, businesses, councillors and other members of the community to have their say.

“We’re asking as many people as possible to have their say on the choices under consideration. Road infrastructure improvements affect everyone. They help us move around the country and connect with one another, whether we are driving, cycling or walking.

“The options we have put forward today will provide quicker, smoother journeys for jobs and leisure, support a growing economy and foster local regeneration and improve safety, reducing collisions and the delays these can cause.

“It’s essential that we understand people’s views so we can ensure we deliver the right scheme to make this section of the A64 fit for the future.

“Feedback from the public will help us understand how the proposed options impact road users and the local community. People will be helping to shape the scheme and maximise the benefits as we progress the design.” 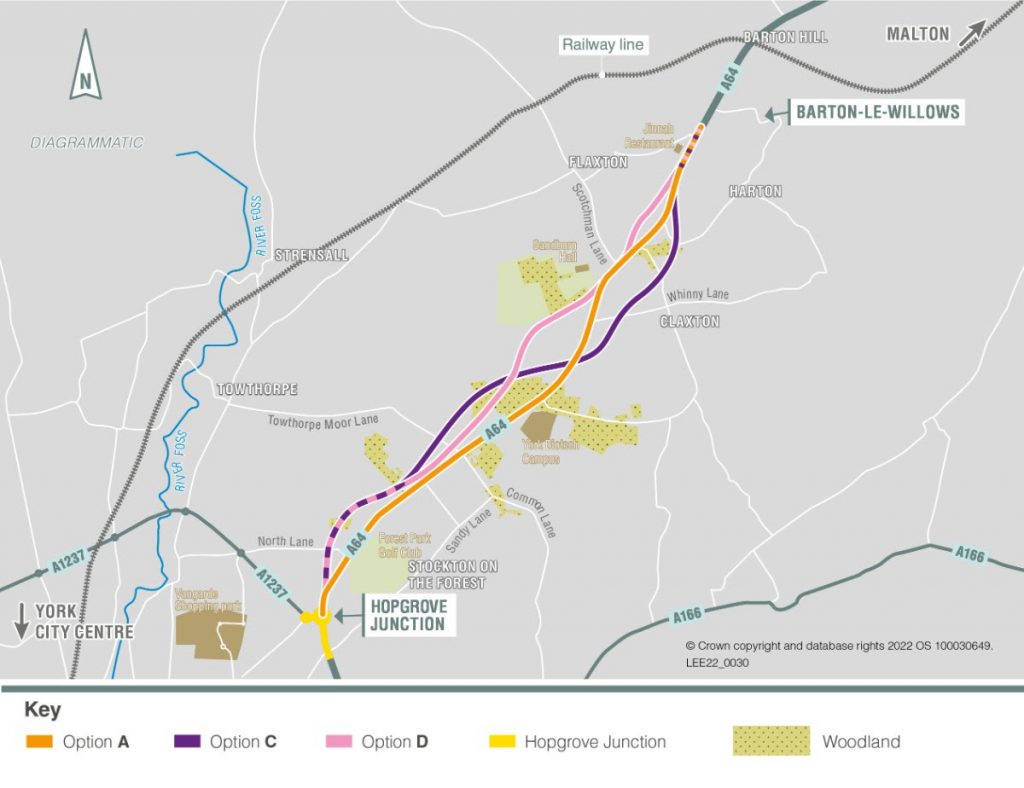 The six-week consultation runs from today to Monday, 5 September, with feedback helping National Highways develop its planning application for a Development Consent Order (DCO), should the scheme be developed further.

A DCO is required for all nationally significant infrastructure projects and will allow for the Planning Inspectorate to make a recommendation to the Secretary of State, who will decide on whether development consent should be granted for the proposed scheme.

The A64 Hopgrove project is one of 32 announced in National Highways’ 2020-25 Delivery Plan as being considered by the government for further development for the next five-year roads investment period which starts in 2025.

Some £347 million of funding has been allocated to the development of these projects, which have been identified through National Highways’ programme of strategic studies, route strategies, specific areas of research and work with stakeholders. Not all schemes in the pipeline will progress to construction and there is currently no commitment from the government to develop this scheme beyond this current stage.

People can find out more about the A64 Hopgrove scheme options in a number of ways:

A consultation brochure is available online at www.highwaysengland.citizenspace.com/he/a64-hopgrove or the following locations:

People can visit a virtual exhibition at www.highwaysengland.citizenspace.com/he/a64-hopgrove any time between now and the end of the consultation. It includes all the materials that would be available at a public exhibition such as maps and environmental information and there will be instructions so people can navigate through the room.

Two public exhibitions with the project team will be held at the following locations, dates and times:

Two online webinars will take place on Wednesday, 3 August and Thursday, 1 September, both from 6pm to 7.30pm. Attendees will receive a presentation about the route options from the project team and be given opportunities to ask questions using a chat function. To register for either, please email [email protected]co.uk or call the project team on 0300 470 2164 between 9am and 5pm Monday to Friday

An advertising van giving details of the options will visit Scarborough from Thursday 4 to Saturday 6 August, and will be staffed by members of the project team on Friday 5 August who can answer any questions people may have. It will be parked outside Holland & Barrett, Brunswick Pavilion, Westborough, Scarborough, YO11 2PA.  The van will also be parked at Monks Cross Shopping Park in York on 17 August and in York city centre the following day, but won’t be staffed.

Members of the public can also email the project team at [email protected]co.uk or speak to them on 0300 470 2164 from 9am to 5pm, Monday to Friday

Details on how to respond can be found online or in the brochure. 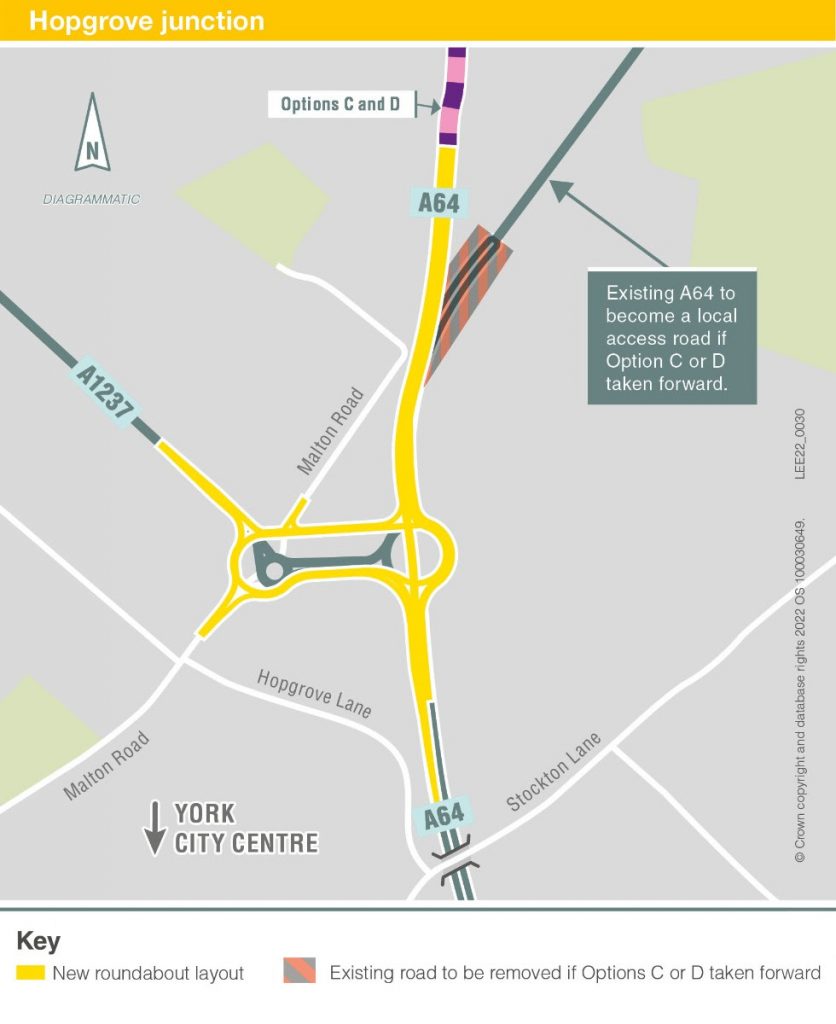 The upgrade being developed for the Hopgrove junction would replace the existing Hopgrove and Malton Road roundabouts with a single extended and signalised roundabout. The new roundabout would widen the existing north and south legs of the A64 Hopgrove Roundabout. A new through road would be added to allow vehicles travelling north to travel straight across the roundabout rather than having to go around it. This would improve connectivity to the A1237 (York Outer Ring Road) as traffic travelling north would no longer need to use the westbound roundabout. A new left-turn slip lane from Hopgrove Roundabout towards Malton Road is also included, heading north. For Options C and D traffic would no longer be able to access the existing A64 from Hopgrove junction as the existing A64 would be capped at the southern end. Traffic looking to join the existing A64 would do so via a new junction at Towthorpe Moor Lane. New traffic light-controlled crossings would deliver safer and more convenient crossing places for walkers, cyclists and other non-motorised users. These facilities would connect with existing routes to the south of the junction. 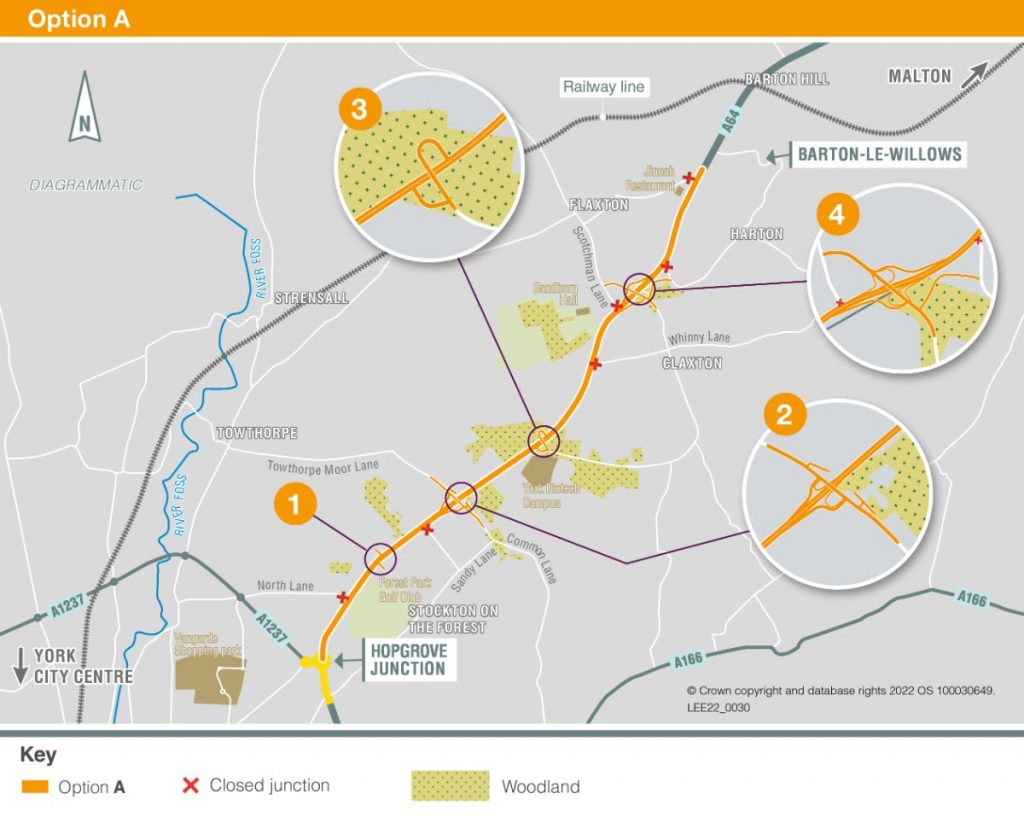 The existing single carriageway would be dualled from a point 500m north of Hopgrove junction up to the existing dual carriageway at Barton-le-Willows, avoiding properties wherever possible. All existing right turns on this section of the road would be removed, and traffic would be able to exit left only. The three major junctions would provide road bridges to allow vehicles to cross the carriageway. Access to the dual carriageway would be through a limited number of junctions at the Highwayman Café, Towthorpe Moor Lane, York Biotech Campus, and Claxton and Scotchman Lane. Three of these would be accessed via a left turn only and provide a bridge over the carriageway. These are called grade-separated junctions. The fourth would be a left in/left out junction. 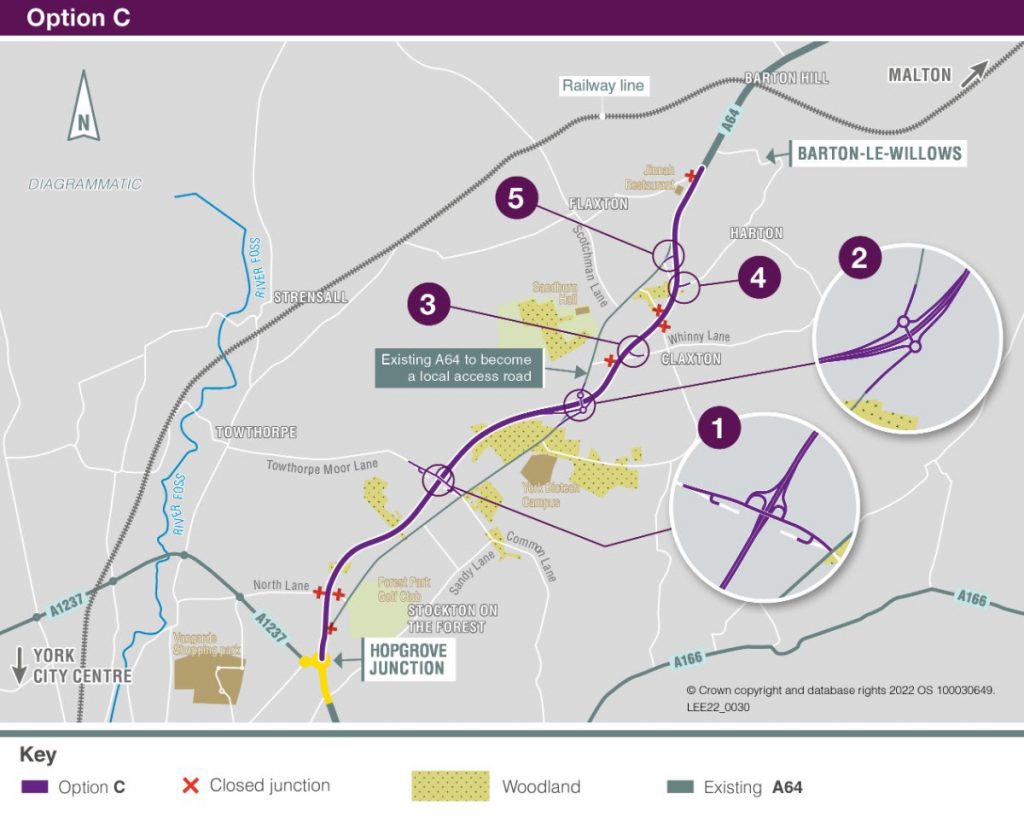 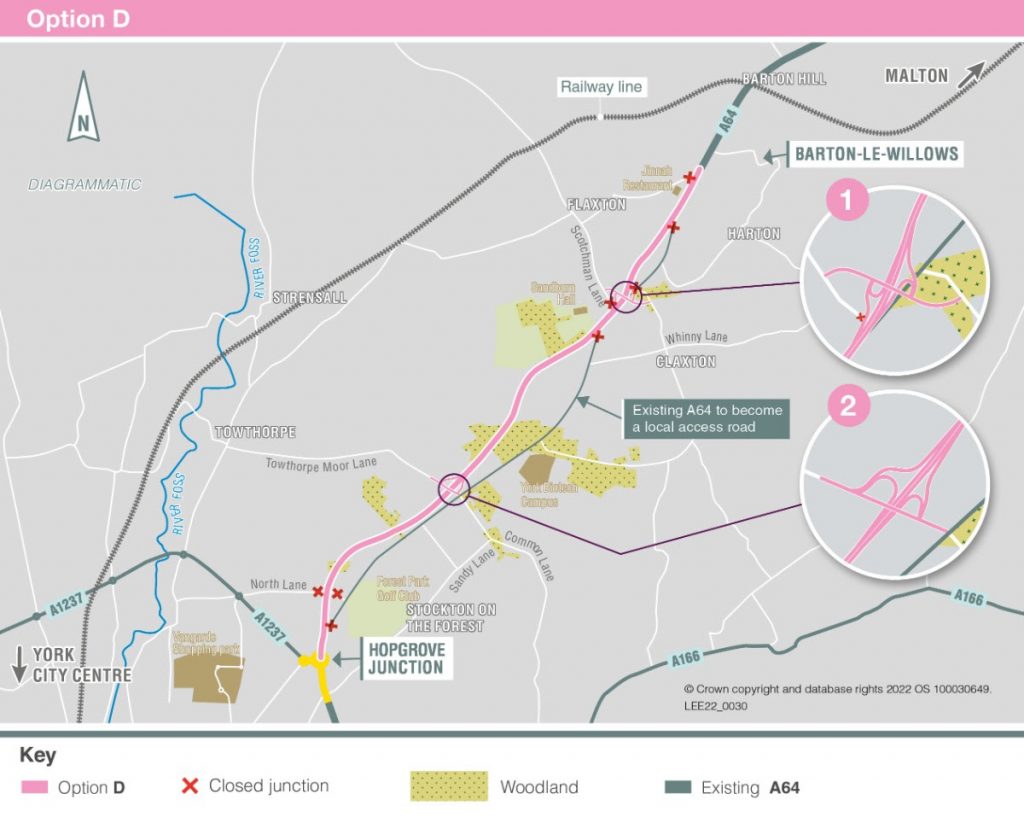 Option D begins the same as Option C but continues to run northwest in parallel with the current A64. It re-joins the existing A64 briefly around the Scotchmans Lane Junction then separates from the current A64 for a short stretch, before re-joining it approximately 1km south of the A64/Steelmore Lane Junction. Access to the new road would be through a limited number of junctions at Towthorpe Moor Lane, providing access to existing A64 and Sandy Lane, the existing A64, giving access to Scotchman Lane, and Claxton. These junctions would be accessed via a left turn only and provide a bridge over the carriageway.

Access to properties that are located on either side of the new road would be maintained via new connections to the local road network. Because a new dual carriageway would be built, this would allow the current A64 to be used as a local access road. Traffic would no longer be able to access Hopgrove junction from the existing A64 because the existing A64 would be capped at the southern end. It would also be capped further north where it would intersect with the new dual carriageway, close to Sandburn Hall. Traffic originating from the existing A64 would therefore need to use the local road network and the new junctions to access both Hopgrove junction (if traveling south) and the northbound carriageway to travel north. 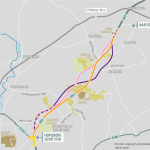