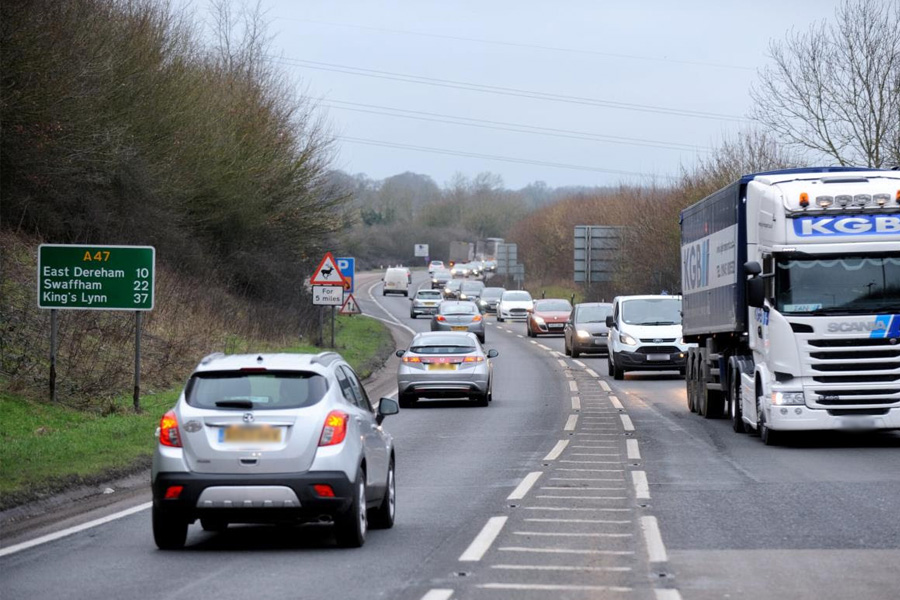 A view of the existing A47 between North Tuddenham and Easton

Plans for a new dual carriageway and junction improvements moved a step closer after Highways England’s proposals were formally accepted by the Planning Inspectorate for examination last Monday (12 April).

Highways England is improving the A47 in six places between Peterborough and Great Yarmouth as part of a £300 million-plus investment, including the Norfolk section between North Tuddenham and Easton.

The Planning Inspectorate will now start the process of a full examination of Highways England’s proposals before deciding whether to grant a Development Consent Order, which will help to inform the Secretary of State for Transport when deciding whether to give the green light for construction to begin two years hence.

Highways England programme lead for the A47, Chris Griffin, said:

“This stretch of road connects areas of growing economic activity around Norwich. The current layout of the road can act as a bottleneck, resulting in congestion and slower journey times. Our improvements will make shorten journeys while improving safety for the thousands of drivers who use this stretch of road daily, while also maintain connectivity and improving access for local residents.

“The decision to accept our DCO application represents a major milestone for the scheme, not only for us as the project team but for all those who have supported this project over a number of years.”

The preferred option for upgrading this stretch was announced in August 2017, and a statutory consultation was held last year that had nearly 700 responses. That feedback found that almost three quarters of people felt that road improvements were needed on this stretch of road, and that Highways England’s proposals would help reduce congestion and shorten journey times.

Feedback received during a consultation in Spring 2020 refined the scheme design, which now includes an added underpass for traffic and pedestrians at Mattishall Lane, replacing the Church Lane underpass and link road.

Changes to the Wood Lane southern junction into Dereham now reuses more of the existing A47, while the new River Tud Bridge has been altered based on feedback from the Environment Agency. A walking and cycling link was added from Honingham to St Andrew’s Church via an A47 underpass, while the Norwich Road junction was moved east to reduce the impact on the church, while maintaining farm access.

The northern roundabout at the Norwich Road junction was changed removing the link to Church Lane, and a new walking and cycling route added between Easton and Lower Easton, replacing the existing one which crosses the A47. New embankments will reduce traffic noise, and an extra wetland drainage zone will provide a welcome boost for the environment by increasing biodiversity.

Councillor Martin Wilby, Chairman of the A47 Alliance and Cabinet member for Highways, Infrastructure and Transport at Norfolk County Council, said:

“The A47 is crucial for the economic prosperity of Norfolk, connecting Norwich to Peterborough in the west and Great Yarmouth in the east. Thousands of our residents use the A47 for commuting, for seeing family, for trading, for holidaying, and far more.

“This package of improvements that Highways England will deliver along the A47 will thus be of huge benefit to not just Norfolk, but to the whole region, making journeys shorter and safer for our residents.”

The Planning Inspectorate’s examination process will provide people with the opportunity to comment on the proposals in writing as well as the chance to participate in hearings. Following the examination, the Planning Inspectorate will make a recommendation to the Secretary of State for Transport, who will decide whether the
project can move forward with construction. If the application is approved, work on building the road is due to start in March 2023.

More information about the Development Consent Order process can be found on the Planning Inspectorate’s website at www.infrastructure.planninginspectorate.gov.uk/

This proposal is one of six projects that Highways England is doing to improve the A47. Three sections of the 115-mile stretch of the A47 between Peterborough and Great Yarmouth will be upgraded to dual carriageway. Norfolk sections will be upgraded between Blofield and North Burlingham and from North Tuddenham to Easton, while in Peterborough the A47 between Wansford and Sutton will also be dualled. There will be further junction improvements at the A141 roundabout in Guyhirn, at the A11 Thickthorn roundabout for Norwich, and at Great Yarmouth junctions.

For more information about the plans, please visit: https://highwaysengland.co.uk/our-work/east/a47-north-tuddenham-to-easton-improvement/ 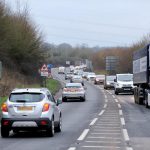