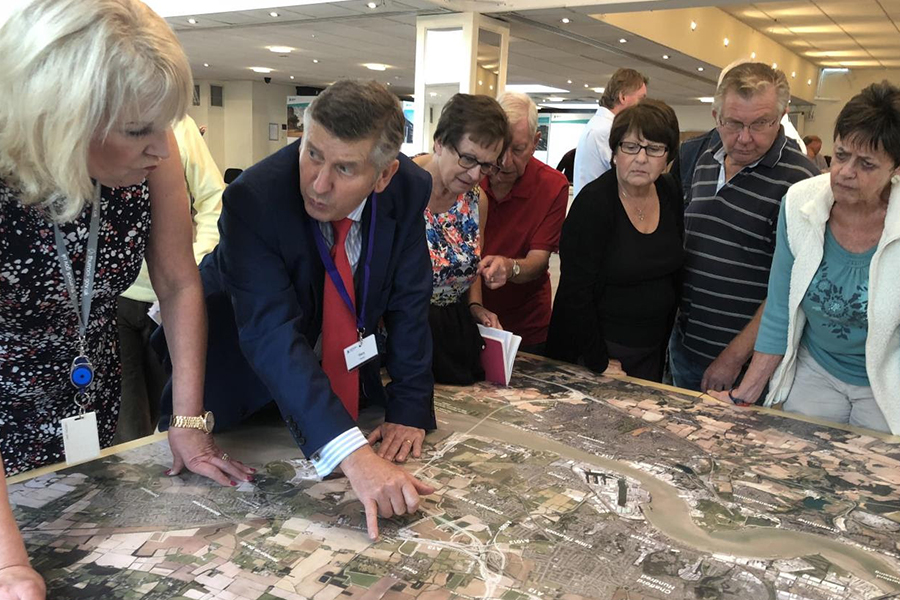 With a major consultation into a new Lower Thames Crossing entering its final week, Highways England is offering a preview of the route and an insight into the unique history of the Kent and Essex Thames Estuary area.

A new Lower Thames Crossing will be Britain’s biggest road project since the M25 was built and the first new crossing of the Thames east of London in more than 35 years. It will nearly double road capacity across the river Thames and almost halve northbound journey times at Dartford Crossing when it opens to traffic in 2027. 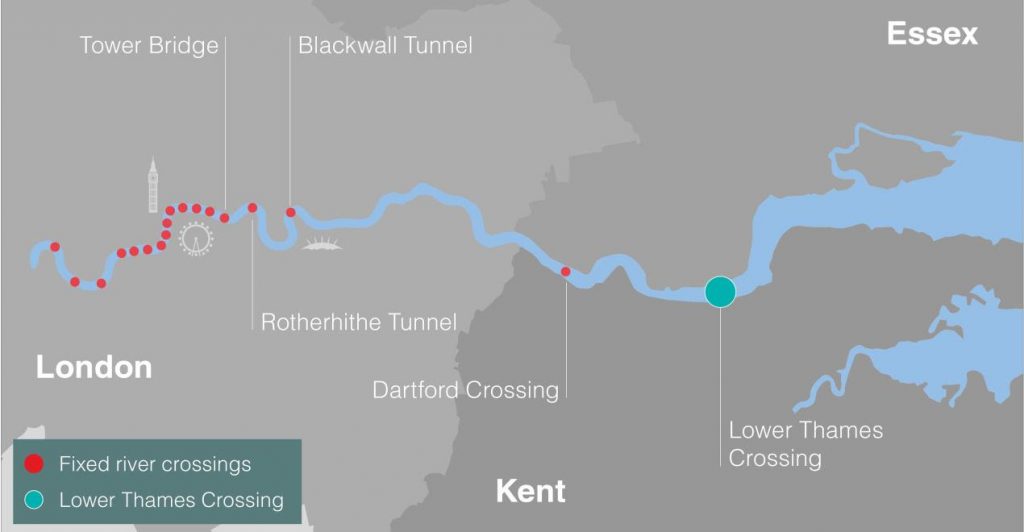 Caption: The Lower Thames Crossing will be the first new road link across the Thames since the Queen Elizabeth II Bridge opened at Dartford in 1991

“The Thames has been and remains a vital artery for moving goods and people across Britain, and we’ve moved from trade going along it to going across it to reach our ports. This living piece of our history will continue to play an important role in the future. However, with just one crossing of the Thames east of London, it’s now vital that we relieve Dartford and deliver this second crossing so that we can increase capacity for crossing the Thames and improve journeys.” 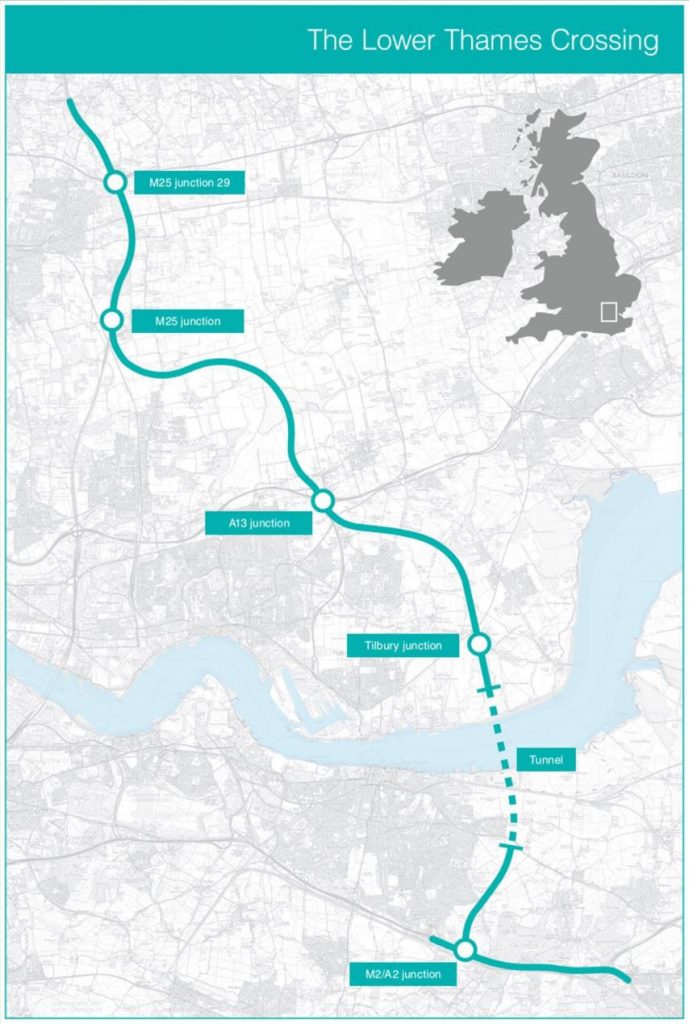 The ability to cross and use the Thames has long played a central role in shaping Britain’s economy and culture. Ferries have linked Gravesend and Tilbury for at least 1,500 years, with evidence of a Saxon settlement near Stanford-le-Hope from the Fifth Century. The crossing point has retained its strategic importance ever since, acting as a vital link between Kent and Essex, and a gateway between London and the rest of the world, with a ‘Long Ferry’ connecting Londoners to Gravesend and the Channel ports beyond. As late as 1840, it’s recorded that 1,141,285 passengers were carried on the Thames ferries to and from the capital. However, new technology, in the form of the new railways, brought this chapter in the river’s long history to a close.

Ferries were not the only means to connect Gravesend and Tilbury: floating pontoon bridges have twice linked the towns during times of conflict, first during the Spanish Armada in 1588, and again during World War One to allow troops easy passage on their way to the Western Front. During the Napoleonic wars, an attempt was made to drive a tunnel under the Thames in 1802, but this visionary scheme advanced no further that the first shaft just west of Gravesend.

So valuable was the crossing point that both Gravesend and Tilbury have been defended at multiple points in history, with early-warning beacons erected from as early as 1377 during the Hundred Years’ War. It was at Tilbury that Queen Elizabeth I gave her famous rallying cry to troops awaiting the Spanish Armada in 1588, defending her strength as a female leader: “I know I have the body but of a weak and feeble woman; but I have the heart and stomach of a king, and of a king of England too”.

“The River Thames has long played a vital role in the life of this region, from trade and transport to subsistence and defence. Thanks to the amazing archaeology preserved on waterlogged waterfront sites, we have a great deal of exciting information on how life on its banks has changed over the centuries.

The Gravesend-Tilbury crossing has long history, not least in the defence of the realm– for example, the towns were actually linked during the First World War by a floating pontoon bridge to help win the war: now 100 years later, we can reinstate that connection, but this time to enhance our peace and prosperity.”

Georgian and Victorian engineering saw numerous bridges built across the river, with crossings outside of London increasing in importance. As for tunnels under the Thames, the first dates back to 1843 at Rotherhithe. The first Dartford Crossing tunnel was proposed in 1924 and opened in 1963 with a second tunnel in 1980. Above ground, the Queen Elizabeth II Bridge opened in 1991, since when 1.5 billion journeys have been made across it. This crossing was designed for 135,000 vehicles a day, but it now carries more than 180,000 vehicles daily:  clearly, a new Lower Thames Crossing is urgently needed.

The Lower Thames Crossing will connect communities, boost the economy and add vital extra resilience to the road network while reducing pressure on the existing Dartford Crossing. It is set to be the most ambitious road project since the M25 opened 30 years ago and will include the UK’s longest road tunnel.

The 14.5 mile route connecting Gravesham in Kent and Thurrock in Essex is expected to reduce traffic at Dartford by 22 per cent, with 14 million fewer vehicles using it every year. It will almost halve the morning peak average journey times between M25 junctions 1b and 31 from nine minutes to just five.

A 10 week consultation, which has included more than 60 public events, closes on Thursday 20 December at 11.59pm.

All information is also available online at www.lowerthamescrossing.co.uk/haveyoursay 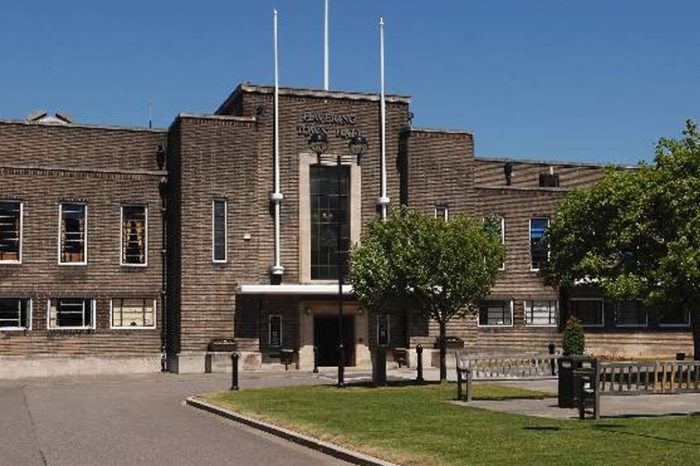 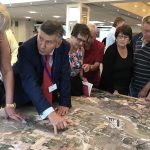