Frustrated travellers played football, frisbee and touch rugby on the M1 after police closed the motorway for more than six hours because of what appeared to be a black bin liner.

Thousands sat in gridlock since at least 8am, when Thames Valley Police closed the three-lane motorway between junctions 14 and 15 because of a “suspicious object”.

Footage broadcast by the BBC showed a bomb disposal robot dragging a black rubbish bag off the hard shoulder, which appeared to have contained a liquid and yellow substance.

Tim Mayer, a Conservative councillor from Coventry who has been caught up in the delays, said communication from police has been “appalling” but people have been trying to make the most of the free time.

“There’s a five-a-side football competition, a bit of rugby, a guy cycling up and down in the wrong direction,” he said.

But emergency services have not given any updates, said Mr Mayer, leaving thousands of people stuck on the side of the road since breakfast.

“There are a few people with coffee in the car who have shared it around and others with some boiled sweets who have been generous,” Mr Mayer said. “But the communication [from police] has been appalling.”

Thames Valley Police previously urged the public to avoid the M1 after a “suspicious object” was found under a bridge “at around 7.30” on Friday, according to a statement, with police and fire services attending the scene.

Mr Mayer said he has been stuck in traffic since 8am, without any direction from the emergency services.

“There’s been absolutely no communication bar what you can pick up from the local press and Twitter,” he said.

Liz Searle, chief executive at the Keech Hospice in Luton, said she had been impressed by the good humour of everyone trapped on the side of the road.

“Everybody was being so helpful and chatty and high-spirited,” she said, “which is lovely to see despite the circumstances.”

Mrs Searle escaped the gridlock when police began to turn traffic around.

A spokesman for Highways England said the amount of traffic trapped was “down to about three or four kilometres” from a previous high of six kilometres, but could not comment on the details of the “suspicious object”.

Police told the Press Association they are still attempting to establish what the object is.

“We are still on scene on the M1,” the force said in a tweet. “Closures are still in place.

“We are still working with partners to re-direct motorists.” 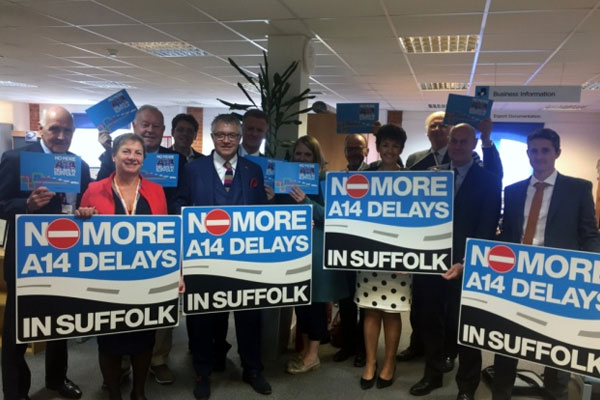