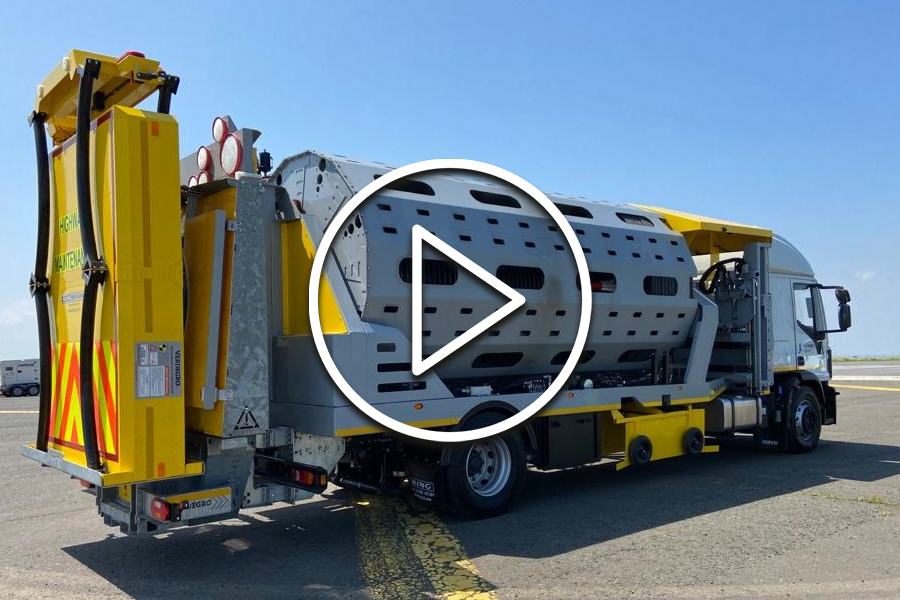 Highways England has today released footage of a second automated cone laying vehicle designed to protect roadworkers which is now undergoing off-road trials in the UK.

Working with a group of industry experts, Highways England has been on a journey to develop automated vehicles which will take out the human element involved in putting out cones – eliminating one of the biggest risks facing roadworkers.

Two automated vehicles have been developed as part of that vision. The first, developed by Highways Care, has completed its on-road trials and can now be taken out to the marketplace for use on the strategic road network.

And now the second vehicle, developed by King Highway Products, has been unveiled as it carries out extensive off-road testing at Manston Airport in Kent. This vehicle is quite different because King has opted for more of a ‘revolver’ style deployment with a huge rotating drum putting out and collecting the cones. 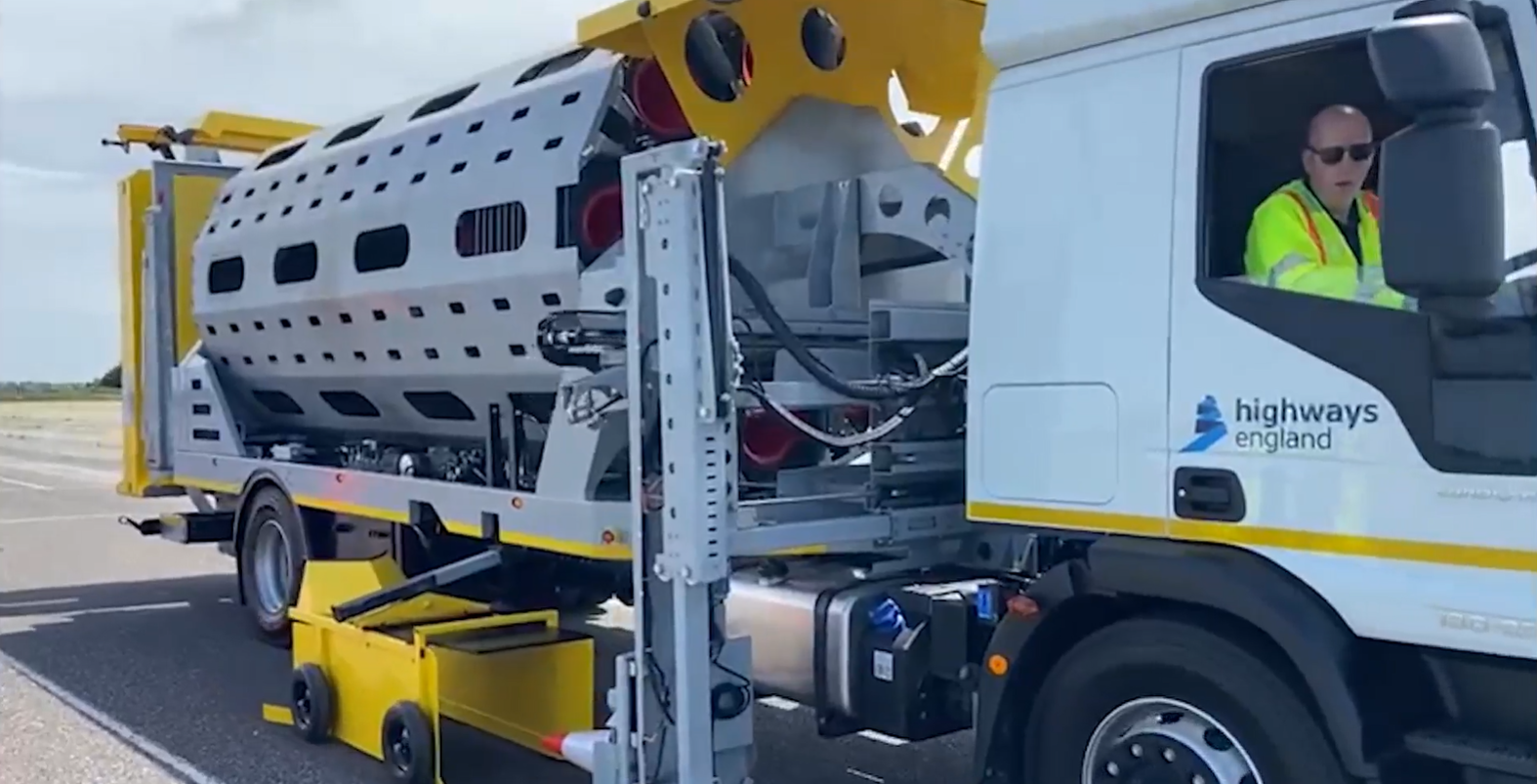 The Kings Highway Products vehicle with its unique revolver-style drum for putting out cones.

Currently, putting out cones is undertaken by two people on the rear of a vehicle working in tandem. Usually working at night and in all weathers, the workers lift up to six tonnes in cones alone per shift.

Cones are vital to protect road users and road workers when essential work is being carried out but with motorway traffic thundering past, the job can be quite scary. The automated vehicles will improve safety and free up two workers for other tasks.

“The King vehicle is very innovative and quite something to see in action. The off-road tests have been extremely promising so far and we are looking forward to taking this forward.

“At Highways England, we are always looking for ways to improve safety and so we were very keen to do what we could to support the testing of these automated machines which will not only reduce the potential risk to road workers but also take away a physically demanding and laborious task.

“To watch these two vehicles develop from concept, to prototype, testing and ultimately being used on our roads is incredibly rewarding and we are looking forward to both being routinely used for roadworks on our network.” 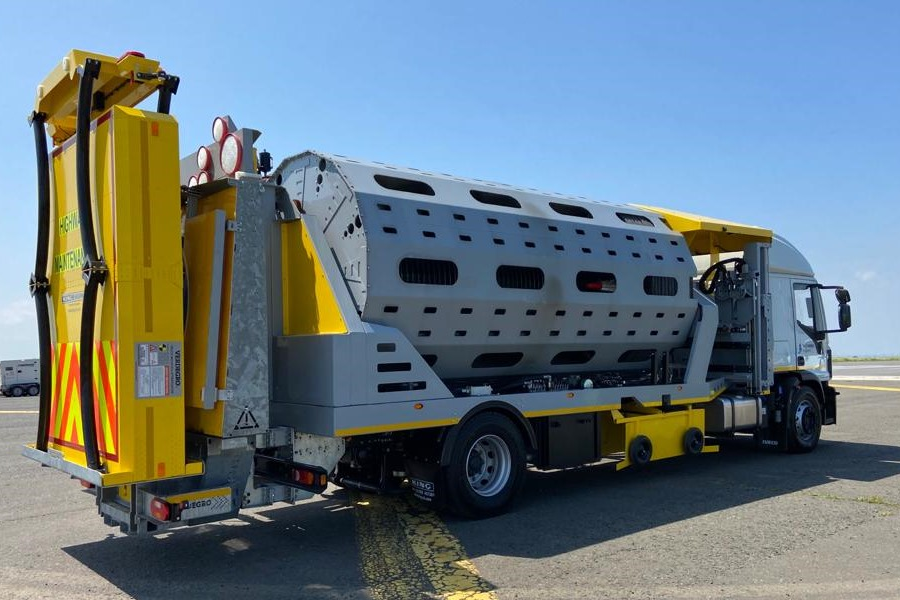 The second automated cone laying vehicle to be developed which is undergoing testing at Manston Airport.

“We are very proud to have developed this innovative machine in conjunction with our partners at Verdegro, whilst working alongside Highways England, Kier, and HW Martin.

“The unique design enables it to be used as a multi-purpose vehicle, negating the requirement for an Impact Protection Vehicle (IPV) whilst setting out the signs and taper. The vehicle utilizes standard one metre cones which are laid and collected in a continuous cycle via the rotating barrel.

“We look forward to continuing the off-road testing to prove the machine’s reliability, before moving to on-road trials later in the year.”

“The method of the King machine deploying/retrieving from the side is truly unique. The added safety feature of a crash cushion offers the workforce increased protection whilst carrying out their duties. The continual movement of the barrel also allows the vehicle to constantly be moving whilst in action which will further reduce the exposure faced by our workforce.

“The use of the automated cone laying machines support our commitment to continuously improve the safety of our operations and we are keen to see the progress of this machine on road trials.”

Highways England have funded support to this project through the Innovation Designated Funds programme and established a minimum standard while the companies themselves are developing the vehicles.

The vehicles are among a host of innovations being showcased by Highways England at the ITT Hub event this week. This is the first Innovation and Technology in Transport event and is taking place at Farnborough International Exhibition and Conference Centre on Wednesday and Thursday (30 June and 1 July).

It comes after Highways England recently launched its innovation and research strategy. The new strategy outlines how innovation, research and technology, are critical to developing the knowledge, tools and solutions to respond to a changing future. Projects like the automated cone laying vehicles are examples of how the government company is working with industry partners to innovate and create a safer, greener and digital future. 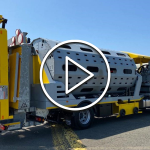