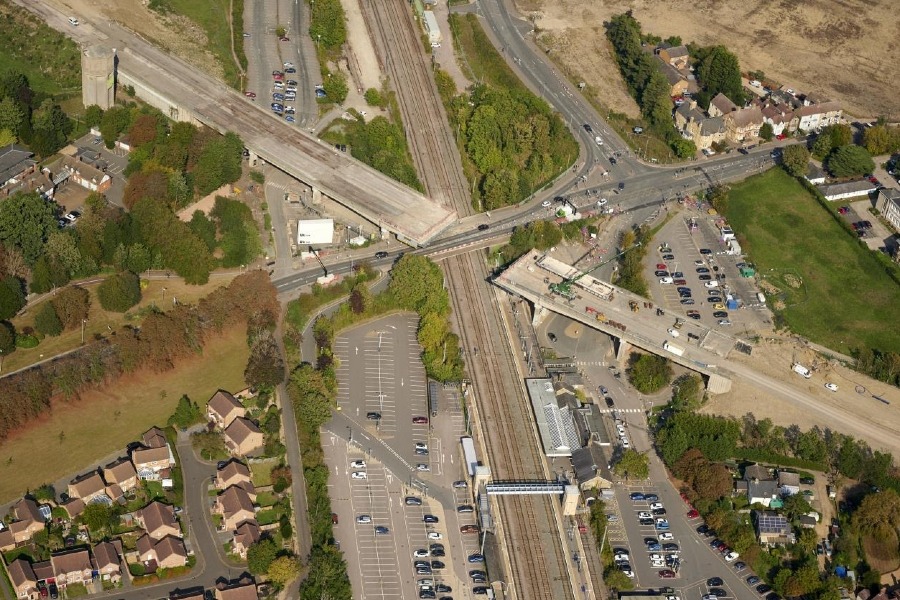 Work to remove the 12,000-tonne viaduct over the railway at Huntingdon on the old A14

A new access to a town railway station will be the latest step towards completion in the closing stages of Britain’s biggest roads project.

Highways England’s largely-completed £1.5 billion upgrade of the A14 in Cambridgeshire has been dismantling the old 12,000-tonne A14 viaduct over the railway at Huntingdon, and the access to the station will change from Monday 30 November to accommodate these works.

Access to Huntingdon train station from Brampton Road will be closed in a fortnight, with drivers then using the A1307 – the old A14 – to access it.

Work to create the new access has seen almost a mile (1.2 kilometres) of kerbs installed – equivalent to the length of 12 football pitches – and almost 2,300 tonnes of asphalt laid – roughly the same weight as 382 elephants.

Further work has included installing 26 street lights and a new traffic light junction, while material from the old A14 has been recycled with 250m of it being used beneath the new road. The A1307 (old A14) has now fallen by eight metres in height compared to what is was when it went over the viaduct.

Work around the station will continue until next Spring, including continuing the removal of the viaduct, improving the station car park, and diverting utilities such as gas and water.

The new station access follows the opening of the 148m long Pathfinder Link into Huntingdon a fortnight ago, which now provides a way for people to get into Huntingdon from the A1307 (the old A14) to the east. Once the work to remove the railway viaduct is completed in 2022, the old A14 will also provide another route into the town from the west.

The improved 21-mile section of the A14 is a vital link which connects the East coast and the Midlands, and takes up to 20 minutes off journeys for the 85,000 drivers who use it daily. It opened some eight months early on Tuesday 5 May, just before the initial easing of lockdown, so it has been able to meet the demand for added capacity at a crucial time.

The project was due to open in December this year, but efficient and innovative working by the team saw the last of the 24/7 roadworks removed in May, with the 12-mile long new bypass opened a year ahead of schedule in December 2019. 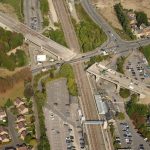