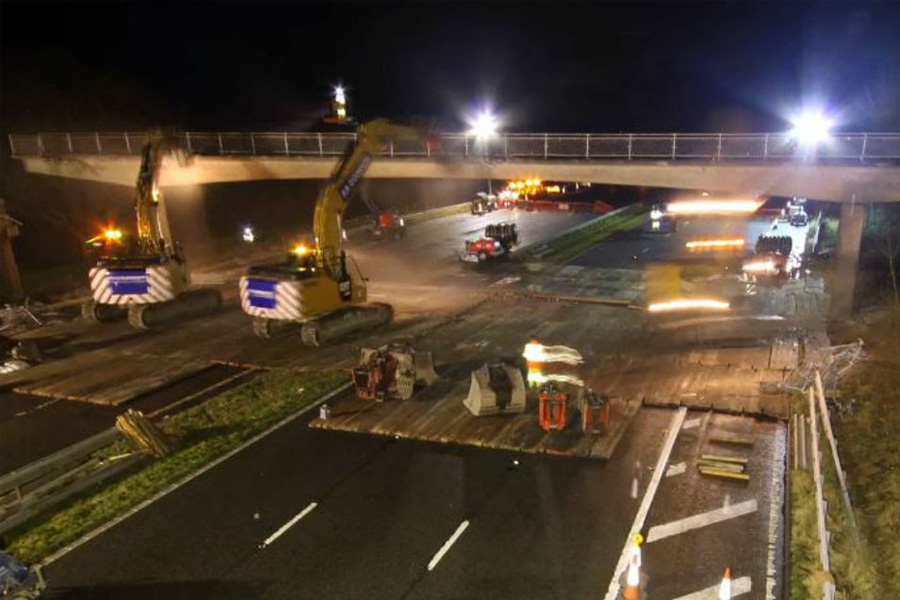 Highways England has released a time lapse video showcasing last weekend’s 26-hour operation to demolish a footbridge over the M6 in Lancashire.

The motorway was closed from 9pm on Friday night to 11pm on Saturday night – re-opening more than a day early after 80 staff worked to demolish Nan’s Nook footbridge linking Greaves Hill Lane and Guys Farm Activity Centre near Forton.

The closure, between junction 32 of the motorway at Broughton Interchange and junction 33 at Galgate, had been scheduled to last until 5am on Monday but Highways England staff and contractors worked as quickly as possible to demolish and then remove the 320 tonne bridge which was 62 metres long and 2.4 metres wide.

The structure – a post tensioned concrete footbridge sat on concrete pillars installed in the 1960s – was removed for safety reasons as parts of it were too low for some modern vehicles and it had only remained open with hard shoulder restrictions beneath it.

“It’s worth repeating our thanks to people living along the A6 diversion route as well as motorway users – particularly the haulage industry and emergency services – for their support and patience at the weekend.

“Closing the motorway is not something we do without a great deal of thought and careful planning but it was the only way we could remove the bridge safely. We promised to re-open the motorway as soon as possible and in the end we did that more than 24 hours earlier than scheduled.”

Lancashire Police and Highways England’s own traffic officers were also involved in the operation, helping to manage traffic approaching the motorway closures and keep vehicles moving along the A6.

Three 36 tonne excavators with pulverisers were deployed to the site and 16 wagon loads of spoil were removed. More than 300 tonnes of concrete was removed from the site and will be recycled into building sub-base materials. All the metal in the reinforcement bar and pedestrian hand rails will be fully recycled too.

Staff also took the opportunity to use the motorway’s closure to carry out other works in the area including gantry inspections, minor maintenance and repair work and some carriageway resurfacing – all sparing motorway users from the inconvenience of extra roadworks. 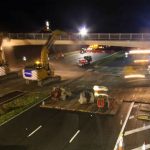