Lorry drivers have been urged not to travel to ports in Kent after France closed its border with the UK for 48 hours.

In a bid to ease congestion in the county, Operation Stack is now in place on the coast-bound M20.

Passenger ferries and lorry freight bound for France have also been suspended from Portsmouth and Newhaven.

“Most of freight is not accompanied and that can still flow of course,” he said.

Inbound freight is also coming into Dover on Monday, the port has confirmed.

Meanwhile, the French Embassy in the UK tweeted that “in the next few hours” a “solid health protocol” would be established to make sure movement from the UK could resume.

Late on Sunday night, Mr Shapps asked the public and hauliers not to travel to ports in Kent or other routes to France.

He said he was working urgently with his department “to minimise traffic disruption in the area”.

In Portsmouth, Brittany Ferries said it was unable to carry passengers and accompanied freight (being transported by a driver) to Caen as expected.

It said the border closure would affect around 1,000 passengers and 400 freight vehicles planning to travel to France on Monday and Tuesday.

However, the Hampshire port said services to and from Spain and the Channel Islands were operating as normal.

Former BBC reporter Carole Madge boarded a ferry late on Sunday to travel to France with her family.

She said: “We were really excited. But sadly, once we got onboard and into our cabin, the announcement came out that we wouldn’t be going anywhere.

“We had to stay on the ship overnight and they turfed us all off this morning.”

The Sussex Resilience Forum said the port had not reported any congestion and traffic on roads in Sussex was at normal levels.

What is Operation Stack?

Operation Stack is an emergency measure designed to prevent gridlock in Kent. Police work with Highways England and the county council to put it in place.

Under the measure, freight is separated into two queues on either side of the coast-bound carriageway between junctions 8 and 9.

One lane is used for traffic heading to the Eurotunnel terminal and one lane is for port traffic. The middle lanes are kept clear for emergency vehicles.

Non-freight traffic is diverted off the motorway and onto the A20.

About 10,000 lorries a day travel between Dover and Calais during peak periods such as Christmas.

But the decision by France to close its borders means no accompanied freight can leave and long queues are expected.

The leader of Kent County Council, Roger Gough, said: “National government has urged vehicles not to come to Kent because we are anticipating some 17,000 vehicles coming into the county to make the crossing over the next couple of days.”

Manston Airport in Kent is being prepared to take up to 4,000 lorries, the Department for Transport has confirmed.

Lorry driver Rick Mayo, who is stuck at Medway Services, told the BBC he thought the situation was “ridiculous”.

He said: “Truck drivers don’t come into contact with people, we’re in the truck on our own, we self-isolate for three or four days at a time.

“Then, when we do [come into contact with other people], it’s limited with masks and with gloves on”.

There are fears the border closure could disrupt food supplies and cause difficulties meeting orders for British goods in continental Europe.

The chief executive of the Road Haulage Association, Richard Burnett, said the “fresh food supply where it’s short shelf life and there will be product on its way now, that’s where the challenge comes from”.

But Mr Shapps said: “The shops are well stocked. In the short term this is not an issue in terms of supply but we are very keen to get it resolved.”

Alex Veitch from Logistics UK, whose members transport goods in and out of the UK, added: “Freight moves in a variety of ways to and from this country and that’s why we’re reassuring people there’s no need to panic buy.

“We are confident retailers will be able to stock their shelves.”

Original source article: https://www.bbc.co.uk/news/uk-england-55392801
Disclaimer: This article was not originally written by a member of the HighwaysIndustry.Com team. 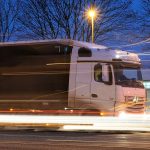